FlyUS, stylized as flyUS, and sometimes misinterpreted as FlyU6, is an American airline that appears throughout the Grand Theft Auto video game series.

It has backstory with a description of "A once great American airline now left with a fleet of aging deathtraps that they can no longer afford to repair or safety-check. Home of vinegary old hags and bitter fruit flight attendants." As stated in radio commercials in Grand Theft Auto V, it was founded in 1983 with the same era planes still in service. The flight attendants are described as old, cranky and miserable, and the air service is implied to be poor and uncomfortable, as one of their slogans is "Sit back, relax and shut up". This could possibly be a stereotype of American flight companies. The Motto and tagline is "Live a Little, fly With US". It is known to offer domestic, international and business flights.

FlyUS has a huge presence in Liberty City with all the planes belonging to the airline. The company has teamed up with the NOOSE, in order to give away free tickets to "rogue states" such as Afghanistan, Iraq, Libya and nearby countries with all expenses paid, in 2009. Inside the US, FlyUS has been known to serve personal information of passengers to criminals.

FlyBoy, who supposedly is an employee of FlyUS, sends Huang Lee a spam mail claiming that the company has teamed up with the NOOSE, in order to give away free tickets to "rogue states" such as Afghanistan, Iraq, Libya and nearby countries with all expenses paid. Oddly, the company is misspelled as "FlyU6" in the e-mail. In the last lines, he writes "When booking, please note that FlyU6 will not sell-on your private details to criminals, hackers, or terrorists (outside of the US)."

It is unsure if the planes at Francis Intl. belong to FlyUS since the livery does not bear FlyUS titles but the livery is similar to the one in GTA IV.

In Los Santos it has a smaller presence, but one of the largest there. Also, FlyUS seems to let passengers smoke on board, as a pack of cigarettes are seen to come with the in-flight meal.

In the GTA V storyline, one of the protagonists, Michael De Santa, takes a FlyUS flight in the mission "Bury the Hatchet". As seen in the mission, while the exterior of the plane looks modern, the FlyUS interior looks rather outdated. The aged yellowing wall and ceiling panels combined with the green striped wall paper and the bright blue seats gives it the appearance of a 1960s airline interior. This could possibly be hinting at FlyUS's apparent use of "aging death traps".

FlyUS is seen operating the following aircraft throughout the GTA series (most are fictional):

FlyUS also has a large ground fleet decked out in their livery, such as airplane and baggage tugs. All ground vehicles listed are fictional. 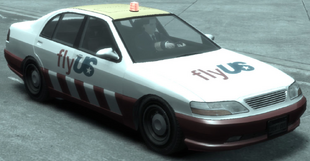 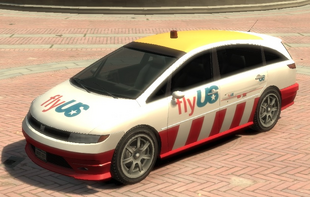 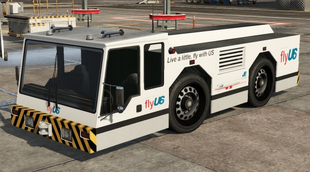 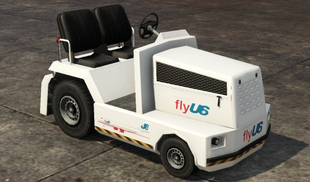 In addition to this, a radio ad in GTA V states that they have added 42 new destinations worldwide as of 2013.

The sunken FlyUS jet
Add a photo to this gallery
While no FlyUS crashes are mentioned in Grand Theft Auto V, a sunken plane can be found in the ocean in the game, bearing a livery similar to the old grey and blue. The FlyUS logo is barely visible on the front piece of the aircraft. The lack of accumulated corals around the fuselage suggest it might have crashed in the sea not long before the events of the game. 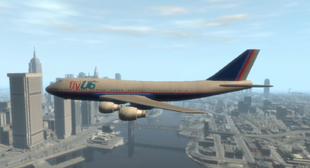 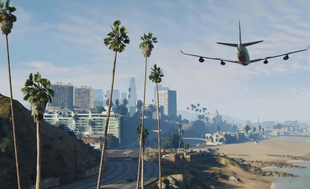 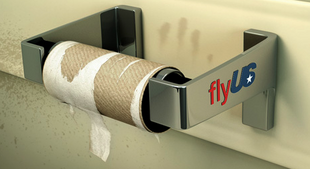 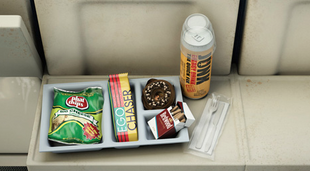 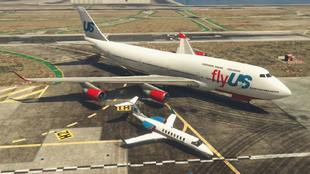 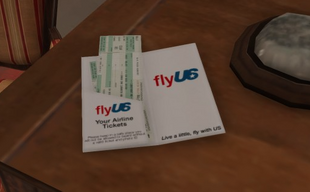 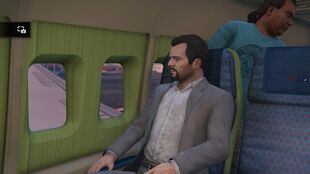 Interior of a FlyUS aircraft (note the archaic style design)
Add a photo to this gallery
Retrieved from "https://fictional-airlines.fandom.com/wiki/FlyUS?oldid=7650"
Community content is available under CC-BY-SA unless otherwise noted.