Pan Pacific is an airline that appeared in the TV series Lost.

Pan Pacific was seen briefly in the episode "Two for the Road". It was Pan Pacific that presumably took Christian Shephard and Ana Lucia to Australia.

The name may possibly be inspired by a real-life Filipino airline of the same name. However, around the time of the show, it was known as Astro Air international.

The airline operated a service between Los Angeles, California and Sydney, Australia. 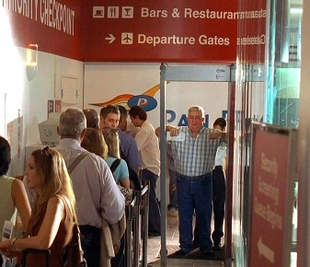 Pan Pacific checkpoint in LAX
Add a photo to this gallery
Retrieved from "https://fictional-airlines.fandom.com/wiki/Pan_Pacific_Airlines?oldid=7581"
Community content is available under CC-BY-SA unless otherwise noted.