Panau Air is an airline that was featured in the 2010 action-adventure video game Just Cause 2.

Panau Air is the flag carrier of the fictional country Panau and also appears to be the only airline serving the territory. Given that the airline is a government business, it could possibly be one of the cheapest airlines in the world. The airline's aircraft are painted in four different colours, which are green, yellow, blue or red.

Panau Air's main base of operations is most likely Panau International Airport. Panau Air is the only airline seen flying in and out of the airport.

It could be based on various Asian carriers including Thai Airways, both the older and government schemes, and Air Koryo, the flag carrier of North Korea, which is the only airline based in the country.

All aircraft that take off at airports, are programmed to rise to a certain height and then continue flying forever, in a straight line. So in that sense, all fights are international.

The airline operates a fleet of fictional "Aeroliner 474" commercial airliners. 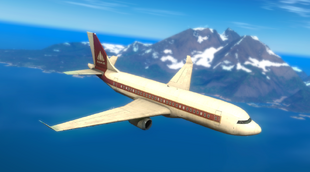 A red marked Aeroliner 474
Add a photo to this gallery

Retrieved from "https://fictional-airlines.fandom.com/wiki/Panau_Air?oldid=7635"
Community content is available under CC-BY-SA unless otherwise noted.