Volano Air is an airline appearing in the TV show Flashpoint in the episode "Grounded". In the episode, a duo of armed hijackers force a Volano passenger jet to land at Toronto-Pearson Airport. The kidnappers demand the release of a certain prisoner within half an hour or they'll start killing passengers. The clock is ticking for Team One to resolve the situation. It is most likely a Canadian airline, and flies to Ontario, it may be based there.

The aircraft seen is a Boeing 737-400. False registration seen is C-XBRY. The real registration is C-FLEJ. Built in 1991 and operated by Flair Airlines.

Volano Air Boeing 737
Add a photo to this gallery

Volano Air is loosely based on Flair Airlines, an Edmonton, Alberta based Canadian airline 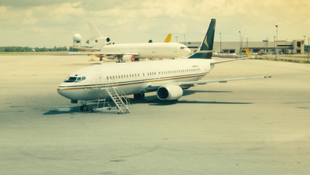 Volano Air 737 being loaded
Add a photo to this gallery

Retrieved from "https://fictional-airlines.fandom.com/wiki/Volano_Air?oldid=7475"
Community content is available under CC-BY-SA unless otherwise noted.