Worldwide Airlines (WWA) is the background airline in the movie "Soul Plane". In the movie the airline Nashawn Wade flies on is WorldWide Flight 119. It takes off and in-flight Nashawn Wade encounters several mishaps aboard the plane which ends in his dog being sucked into the engine, and the plane having to make an emergency landing. Nashawn sues, and eventually makes his own airline, Nashawn Wade Airlines. Not much else is known about the airline. The logo of WWA is never seen.

The aircraft seen is an MD-11. 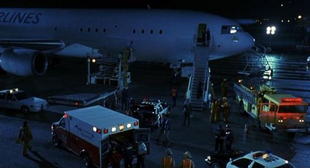 Worldwide MD-11
Add a photo to this gallery

Nashawn Wade's dog is blown out of the cargo hold in WWA flight 119 due to a flight attendant's accidental cargo hold release, and dog is blown into the engine causing the plane to emergency land. These mishaps prompt Nashawn to create his own airline, NWA.

Retrieved from "https://fictional-airlines.fandom.com/wiki/Worldwide_Airlines?oldid=7628"
Community content is available under CC-BY-SA unless otherwise noted.